Home » Lifestyle » Health & Nutrition » I Bet You NEVER Thought To do This with Cucumbers! 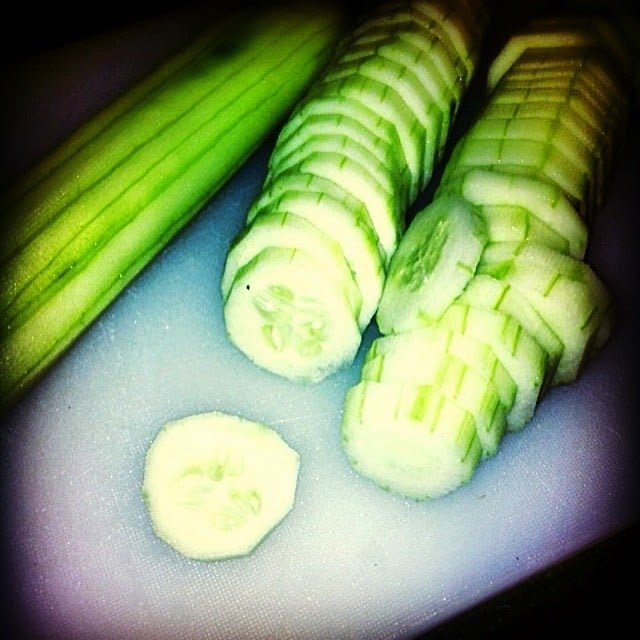 Peel them, slice them, bag them, freeze them and eat them frozen!!  It's one of the best treats I have ever made and I feel I must share the cucumber love and let you in on this amazingly hydrating secret.  I would not steer you wrong.  I have gotten quite a number of my friends, family and co-workers sharing the frozen cucumber love.

First off Cucumbers are a water vegetable.  No harm there.  They have large amount of Silica which is great for your hair, skin and nails!  Tons of Vitamin A in the skin of this veggie.  Lots of Vitamin C and Folic Acid.  All good stuff.  And this lovely veggie hydrates the Eff out of you!

What I have also noticed is that it calms my sugar cravings and those moments when I get Hangry (hungry and angry because of low blood sugar).  I swear, I could be in the bitchiest mood but the moment I munch on some frozen sliced cucumbers? I'm golden!  All calmed down back to my normal self and ready to go.

It is often said that those with cravings may just be dehydrated and advised to drink a glass of water before reaching that cake, candy bar, chips, cheese doodles what have you.  But I definitely do not know many people that are going to drink a full glass of water before a craving.  I don't even do that.  Pulease, you know we are running to the nearest bodega for that Snickers bar or gummies and eating it as fast as possible before feeling that wave of agitated aggravation disappears.  And then where are we?  A few pounds heavier on processed sugar overload with a sugar high that will crash in moments and perhaps an acne breakout the following day, plus a bit of cross contamination from gluten and some serious guilt about not going to the gym to burn it off.  And then from there we are going to want more sugar, because that's what sugar does! You know it.  I know it.  It makes us want more.  Doesn't that sound totally awesome?  I am so kidding!!

I started making Green Smoothies when I enrolled at the Institute For Integrative Nutrition.  This school for me was a game changer; a life changer.  I was then and I still am now all about the veggies.  Green leafy's are my rock, but frozen cucumbers are a delicious snack come true.  At some point during the course of my smoothie making I started to freeze a lot of my organic veggies so they wouldn't go bad, and that happened with my cucumbers.  I would use them in large quantities for my smoothies, but I would also sub them in as ice.  They were frozen, and they get really, really frozen because they have so much water content.  So ice wasn't needed.

Then one day, perhaps during PMS, I don't really remember why, but I was beyond Hangry.  I was agitated.  Following the Paleo diet I couldn't resort to chocolate or cheese like I would have in the past, and raw cacao certainly wasn't going fix this in its bitter form.  I stood in front of my fridge for what seemed like an hour and just stood there stewing and thinking "What the eff can I eat?".  I really wanted the frozen gluten-free donut I had in there, wrapped in tin foil.  I couldn't even see it's goodness and I just wanted it.  But if I did that, then all hell would break loose.  No, I couldn't.  I wouldn't.  And I didn't.  I didn't have much else in the house that day, so I ended up reaching for those frozen sliced cucumbers, and that is where my love affair started and the rest is history.

I bring them everywhere.  I bring them to the office and munch on them there.  I often ask others if they want a frozen cucumber slice and they just look at me as if I am offering them mouse meat.  They are baffled by this.  So what, I'm the weird creative girl working at a Law Firm eating frozen cucumbers.  Whatever!! I'm fully hydrated.  And it stops me from wanting to eat other not so good for you snacks.  I'm in a serious win win situation here.  But after I sell them the idea of frozen cucumbers, they are all in awe of how great this snack really is.  I have my ladies at work stocking up on this hydrating veggie.  Oh yeah, it fully rocks.  You would think I was a Sales Rep for the Cucumber Industry.  Nope not me…I just really like them.

And i'm not the only one who does!  Friends and co-workers have reported that this is now their go to snack for their kids!  They tell me the kids (of all ages) love them!! I believe because the cucumbers are frozen kids think they are sweet treats, not realizing they are the most hydrating veggie on the planet.  It's as if they are eating flavored ices.  So here you have another win win.  Easy to make.  Can be prepared quickly.  You love them and your kids love them!! Whoop Whoop! Success has arrived in the form of a vegetable!

And frozen cucumbers will be the bomb for Summertime!! Sitting on that hot rooftop or beach?

Frozen cucumbers are also great for Summer blended with Mint and Coconut Milk or Coconut Water.  So unbelievably hydrating.  Just make sure you don't go to an interview after that concoction like I did and have to pee twice before it starts!

So tell me are you running to buy cucumbers?  Stock up!  Peel, Slice.  Throw in a zip lock bag and freeze.  A friend of mine raised an excellent question.  She asked if they get stuck together when you freeze them and do the slices turn into a blob?  Yes that happens!  What you can do to prevent that a little better is to try to lay the bag flat in the freezer if you can.  If you cannot, then simply take the frozen bag out of the freezer and bang the bag on the counter Bam Bam and Fred Flintstone style.  BAM! Bam! Bam! Bam! Bam!  A few will stick together like three or four, then you can eat them as a stack.

and receive my free healthy gluten-free guide + updates on the latest!!

Like Goodie? Wanna fall in love? Follow me on Instagram for daily inspiration. Do you love Nutrition, Health & Wellness? Check out the Institute for Integrative Nutrition!

Hi, I'm Julie!  Health Coach, Recipe Creator, and Food & Wellness Blogger.  Thank you so much for being here!  I'm the face behind all the recipes and posts here on this blog.  Goodie Goodie Gluten-Free® is a food & wellness blog that focuses on healthy gluten-free recipes (mostly desserts) and wellness.  Plus vegan, dairy-free, paleo, and nut-free recipes and a side of soul to get you through your healing journey joyfully, and with ease.
Save

Subscribe now and get recipes & exclusive tips delivered to your inbox!

This website contains Amazon affiliate links.  As an Amazon Associate, I can earn from qualifying purchases at no cost to you.