Get gluten-free recipes sent straight to your inbox!

I’ll let you in on a secret lovelies!!  I get cravings too.  Who doesn’t?!  There are days where I just want to eat cake.  All.  Day.  Long.  With chocolate frosting, perhaps some custard-I’d pass on the sprinkles but a side of Ice cream I wouldn’t mind.  And then I would want pizza with extra cheese, and throw some fries in too.  I kid you not.  If I could, I probably would, I definitely used to (not all at once though, and not all day).  Wouldn’t you?  And I’ll tell you, I haven’t had anything near this decadence in a long time. (Praise the lord)!  While it’s fun to imagine scoring the golden ticket to the world made of chocolate, and fantasize about living the life of Charlie from the Chocolate Factory, my body could NEVER handle that amount of sugar.  I’d end up with a sugar hangover.  I would feel horrible.  I’d break out with more acne then life itself, not to mention terrible stomach upset, more eczema and whatever else my body felt like doing to me.  Not to mention my poor immune system.  She’d be shut down.  I’d be sick and in need of antibiotics for whatever sickness my Immune system decided to give me if I consumed that much.  Oh and let’s not forget cavities.  Lots of drilling if my days consisted of non-stop cake eating.We have all been there for the most part, or at least in some form.  I was the girl that brought decadent cheese platters and gluten-free sugary cupcakes and cookies to parties without fail-and there were LOTS of parties in my twenties and early thirties.  Nowadays?  I bring fillet Mignon and Brussels Sprout.  I am happy to report that I am so thankful and grateful for this healthy, fun and better way of eating.  Better way of nourishing me.  Thank you Universe, I have seen the light!

It’s like my body is speaking another language when I eat or drink something that doesn’t agree with me.  Does this happen to you?  Do you get stomach aches, allergies, rashes, acne?  Do you get tired, or even high?

And while most may say, enjoy and go for it, I say hold back for a second…

If you are going to indulge in anything before you go for it, you think about it first.  Is it really worth it? What is at stake?  Would you drink and drive?  Probably not.  Since it’s so hard to resist once you have had a piece of sugar something, to the point that you are going to throw it away so you don’t touch it, and then act  like George Costanza from Seinfeld or Miranda from Sex and The City and dig it out of the garbage can and eat it-You have to really think about what you are doing and why.

I’ll be the first to admit I have done this.  I’m not proud.   I have taken cake from my kitchen garbage and eaten it (gluten-free cake of course)!  I have justified that it’s clean.  That it was only in the garbage for a little while, and hey it was my garbage anyways, it’s totally fine.  Granted it’s been years since I have done this deed, but still. Why couldn’t I have made a green smoothie then?  Because I didn’t know!  That’s right!! In a world spreading processed love-I didn’t know any better.

But what If I told you, you could satisfy your sweet craving with a creamy banana smoothie with cauliflower, cucumbers and unsweetened non dairy milk and seed butter and only taste the sweet decadence of vanilla banana?  You would think I was crazy right?  You may think it’s impossible.  Hmmm? 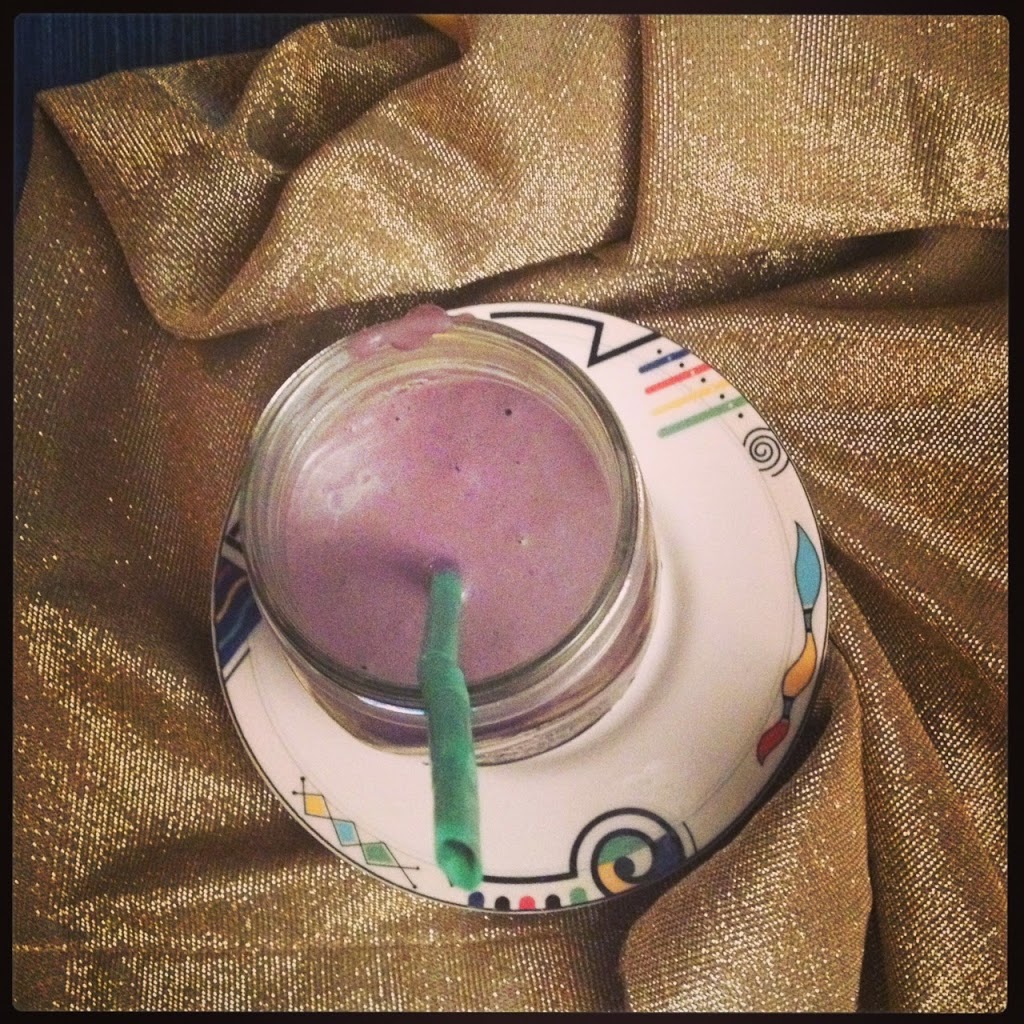 (I have no idea why it came out purple.  I will assume the seed butter did it).

Hold on the chocolate, hold on the cake, hold on the refined sugar something, I’m telling you-this is the shizzle!  This is the golden ticket.  No sugar hangover.  No cavities, breakouts, stomach upsets, allergies or any reactions other then the reaction of pure goodness.  And you finish your smoothie feeling satisfied.  Feeling like the craving is gone.  Feeling like you can move forward, and not be stuck in your craving. This agitated feeling that you must have what you want at that moment.  That passes and it’s like “ahhhh”.  Sweet! (no pun intended).  But sweet!

Never in a mil did I think I’d be blogging to all of you admitting that a fruit and vegetable smoothie could get my goat.  Yes, I own a goat.  No, I’m kidding I don’t really own a goat.  A goat in my New York City apartment would never work out.  But I do have this stellar recipe I created to satisfy my sugar craving that hit the spot immediately.  The sweet spot.  You know the spot I’m talking about.

DIRECTIONS:
1. Add frozen banana, vanilla extract, 2 Tbsp. Sunflower Seed Butter and 1/2 cup Coconut milk into a high speed blender and blend until smooth.  Taste.  If you want more Sunflower Seed butter add the remaining Tbsp.
2.  Add the steamed Cauliflower florets and about 1/4 cup of the Coconut Milk.  Blend.  If it is too thick add the remainder of the coconut milk.
3.  Add the frozen cucumbers.  The frozen cucumbers act as ice, and you are getting some extra veggies too.
4.  BLEND.

TIPS:
–Steamed Cauliflower adds a bit of thickness into a smoothie and has ZERO taste.  You will NEVER know there is Cauliflower in your smoothie.  Don’t forget to steam it first.
-Organic or Local is best, but get what you can afford.
–Frozen Cucumbers are amazing!  Simply wash, peel, slice and freeze in a ziplock bag for up to 6months.  They act as ice and they are a fantastic snack for kids and adults of all ages, and they hydrate!
–Using unsweetened coconut milk and unsweetened nut butters keeps the added sugars low, therefore concentrating on purely natural sugars.
-Can’t find sunflower seed butter?  That’s OK!! Use Almond, Peanut or Cashew nut butter!!
-Frozen bananas.  Peel and put in a ziplock bag and freeze for up to 6 months.  Do not forget to peel the banana!!

As Gene Wilder says “If you want to change the world, you can do it”.

Subscribe and get 2 FREE health cheat sheets to jumpstart your own health!

« I Bet You NEVER Thought To do This with Cucumbers!
Chocolate Chai Iced Smoothie »

Hi!  My name is Julie Rosenthal, and I think your celiac, chronic illness & gut healing journey is meant to be empowering, invigorating, and deprivation-free!  Here at Goodie Goodie Gluten-free, you’ll find healthy gluten-free, and dairy-free recipes that are often paleo, vegan, and chocolaty.  PLUS all things wellness, and a side of soul to get you through your journey, joyfully with ease & love.
Save

Get your weekly dose of deliciousness

sent straight to your inbox weekly!


HOW TO HAVE DESSERT ON ELIMINATION DIETS 🍰 What

REMINDER☝🏼• The feelings you are experienci

NO-BAKE COCONUT DATE BARS 🍫 • If you made a n

THE TEACHER 👩‍🏫 • What is your chronic h

WITH OR W/OUT CHOCOLATE CHIPS? 🍪 it doesn’t h

WHERE YOU END UP🚪• may seem like a closed doo

HOW TO HAVE DESSERT ON ELIMINATION DIETS 🍰 What

REMINDER☝🏼• The feelings you are experienci

NO-BAKE COCONUT DATE BARS 🍫 • If you made a n

THE TEACHER 👩‍🏫 • What is your chronic h